The Comprehensive Nuclear-Test-Ban Treaty Organization (CTBTO) relies on innovation to enhance the capabilities of the Treaty’s verification regime as well as to help move the Treaty closer to universalization and entry into force.

As the fifth event in the CTBT: Science and Technology conference series, SnT2019 will bring together around 1000 scientists, technologists, academics, students, CTBTO policy makers, members of the media and representatives of organizations involved in research and development that is relevant to all aspects of Treaty verification. For more information, download the brochure. 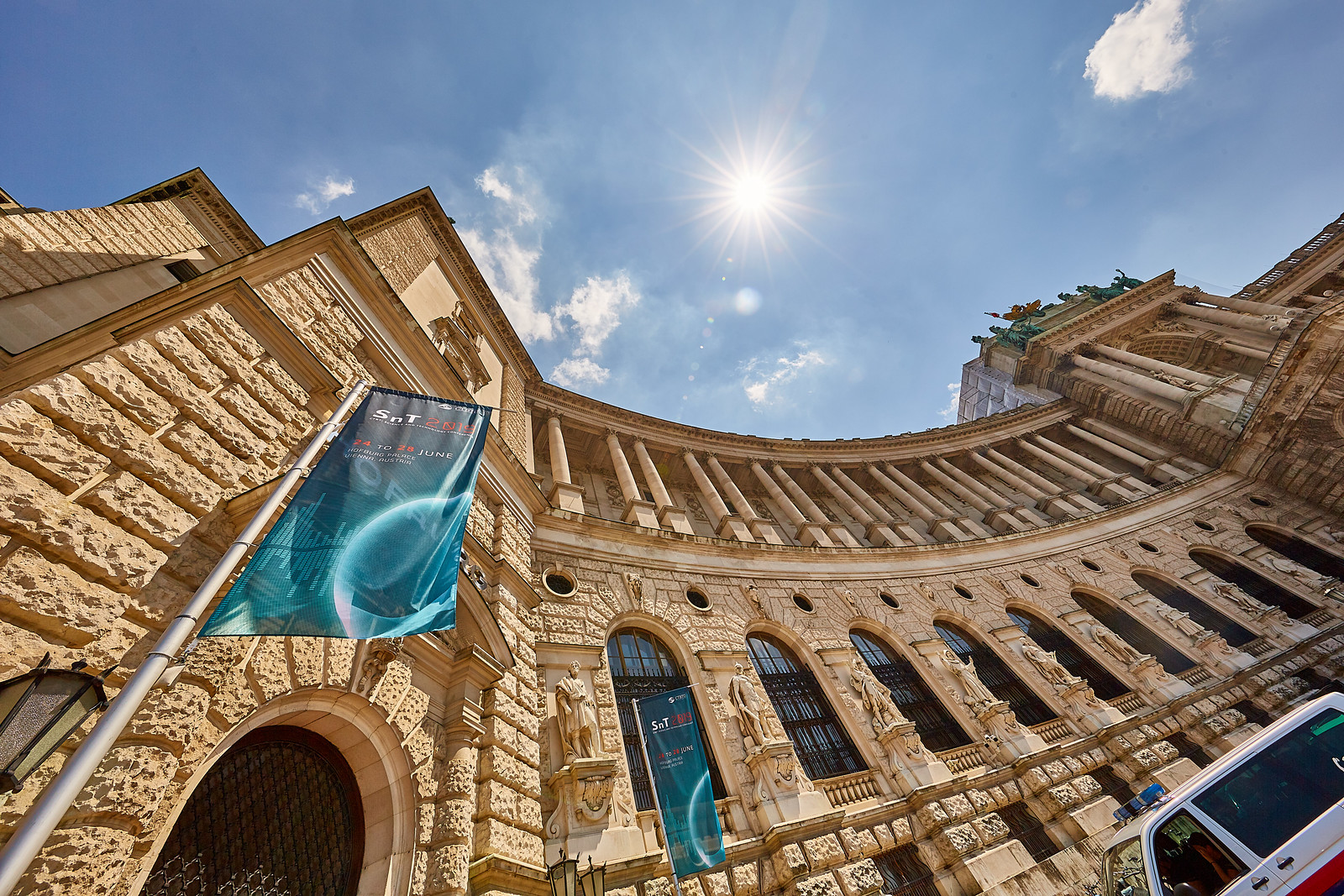 The former UN Secretary General Ban Ki-moon will be participating in SnT2019 and addressing participants.

Notification of Acceptance for CTBTxSDGs Proposal

Notification of Acceptance for Abstracts

This theme focuses on the dynamic or static properties and processes of the earth whose characterization is necessary for the optimum processing, interpretation and assessment of monitoring data. Scientific and technical advances in monitoring the globe for nuclear explosions require an understanding of the way in which features of the earth influence relevant signals as they travel from their point of origin to points where signals are observed. The signals from monitoring networks, as well as noise recorded by those networks, constitute a massive reservoir of data that can support advances in the earth sciences on a global, regional and local scale. Elements of the monitoring effort also need to be able to consider the complexities of the earth as a social system, specifically the interference between anthropogenic aspects and the earth’s system processes, as they are connected and may interact with each other.

One focus continues to be seismic and acoustic wave speed and attenuation, which are essential for locating seismoacoustic disturbances in the earth and its atmosphere and oceans. Another area is atmospheric dynamics relevant to the transport of radionuclides and the propagation of atmospheric infrasound. Yet another area is subsurface properties relevant to the detection of a nuclear explosion by geophysical, radionuclide or other methods during an on-site inspection (OSI). However, relevant characteristics of the earth are not limited to those required for supporting current monitoring technologies. Novel methods of monitoring, including those using satellites or other remote sensing methods, also require characterization of specific properties of the earth’s subsystems.

T1.3 Properties of the Ocean

T1.4 Interaction Among the Earth’s Subsystems

Events such as earthquakes, explosions and releases of radionuclides produce signals and surface features that may be observed locally, nationally, regionally or globally. Such events can be located in time and space, and their characteristics can be estimated based on the data products collected. This theme covers the characterization of the source, the signals being emitted, and what these reveal about the event and its environment. Only if the source is well characterized can its associated signals and anomalies be correctly analysed and interpreted. To ensure compliance with the Treaty, it is essential to understand the full extent of signals that may be generated by a nuclear explosion, as well as to be familiar with any other seismic, acoustic, radionuclide or other signals that could be confused with those from a nuclear explosion.

The Treaty’s provision for OSI depends upon knowledge of the observables that may be expected after a nuclear test and how these could be identified as geophysical, radioactive, temperature or other anomalies or artefacts of testing. While such observations can help distinguish between inactive and active nuclear weapon test sites, the data recorded by International Monitoring System (IMS) stations also make it possible to differentiate nuclear tests from other human made or natural events, thereby serving as a unique reservoir of knowledge for better informed policy making.

One of the challenges facing an inspection team at a historic test site is the need to distinguish and identify observables generated by historic underground nuclear explosions (those conducted before the nuclear testing moratorium) and those resulting from a more recent event. Factors to consider could include recognizing features that may indicate a decommissioned and decontaminated site or those that may suggest an active or reopened site. The types of expertise and capabilities required for these purposes need to be elaborated and could become relevant in the case of any contingency operations that would call upon CTBTO technological capabilities, if requested and if approved by the States Signatories.

This theme focuses on the systems used for the monitoring of nuclear explosions and the processing of the recorded data. This includes advances in traditional areas such as seismic and radionuclide instrumentation, sensor networks and processing methodologies, as well as the exploration of novel methods and the adaptation and integration of methods used in other fields. Diverse sources of remotely sensed data, whether from satellites, aircraft or remotely controlled measurement platforms, may find use in nuclear explosion monitoring. OSIs pose special challenges for sensors and associated equipment, which must be capable of detecting observables related to an event that triggered an OSI, especially those related to a nuclear test.

T3.2 Laboratories Including Mobile and Field Based Facilities

Operation and sustainment of a global network of monitoring systems poses substantial challenges. Near real time acquisition and forwarding of continuous and segmented data from the IMS and the subsequent processing and analysis of data at the International Data Centre (IDC) also present great challenges. Strict requirements for operational data availability, quality and timeliness must be met and sustained. The results of processing and analysis raise further issues with regard to quality and timeliness. The handling of OSI data is also subject to specific requirements outlined in the Treaty and the OSI Operational Manual. In addition, the performance of the IMS and IDC critically depends on enabling technologies such as information technology and power systems.

Beyond the IMS, IDC and OSI, the full Treaty verification system also includes National Data Centres (NDCs) and the possible use of non-IMS data to supplement IMS data. NDCs provide advice to their National Authorities, which make decisions in view of a broader policy context. NDCs may have IMS data and Treaty monitoring functions integrated into national operations and procedures to enhance their performance. NDCs provide feedback to the IDC on its products and services, including the NDC analysis tools, and conduct preparedness exercises jointly with other NDCs.

The CTBTO verification system exists within the broader context of international organizations, global policy making and international collaboration as well as public awareness and safety. This theme explores lessons learned from other arms control agreements and arrangements and from relationships within the broader context as they relate to the CTBT and nuclear explosion monitoring.

Advances in science and technology can drive progress in advising on policies and solutions based on data and evidence and can impact confidence building. This theme explores applications of verification technologies and identifies innovative solutions for change within the framework of the CTBT as well as other relevant agreements and arrangements.

Apart from their purpose of monitoring and detecting nuclear test explosions, IMS data and IDC products may be made available for scientific use, under confidentiality agreements, through the virtual Data Exploitation Centre (vDEC). IMS data may also be used for civil applications, such as nuclear and radiological emergency preparedness and tsunami early warning.

Ensuring that countries and institutions have a robust science‒policy interface requires the wide dissemination and appropriate communication of scientific knowledge to both decision makers and the general public. It is therefore important to raise awareness through a broad range of outreach initiatives and science communication.

T5.1 Science in Policy Discussions and Lessons Learned from Other Arms Control Agreements and Arrangements

The virtual Data Exploitation Centre (vDEC) provides scientists with access to IMS data to conduct research and to publish new findings. The strong relationship between the scientific and technological community and the CTBTO helps to ensure that the IMS remains at the forefront of technological innovation and that no nuclear explosion goes undetected. Conference participants are encouraged to make use of vDEC to carry out scientific studies and assessments and to present their findings at SnT2019. Requests for access to vDEC can easily be completed and submitted online at ctbto.org/specials/vdec/.

Increasingly recognized as a contributor to preserving peace and security in a world riddled with problems not limited to nuclear insecurity, the Comprehensive Nuclear-Test-Ban Treaty (CTBT) and the CTBTO Preparatory Commission for the Comprehensive Nuclear-Test-Ban Treaty Organization (CTBTO) offer opportunities that are beneficial to human well-being. Beyond serving the core mandate of the Treaty, the capabilities of the CTBT verification regime can also contribute to sustainable social and economic development and yield compelling new civil and scientific benefits. Therefore exploring the ways in which CTBT verification technologies and data collected by the International Monitoring System (IMS) can be paired with emerging tools (e.g. geospatial imagery, machine learning, data visualization) can help pave the way to potentially high impact outcomes for sustainable development. Sharing IMS data for civil and scientific applications under standard confidentiality agreements has proven to be a benefit to the primary mission of monitoring for nuclear explosions because the expanded experience with and knowledge of signals and noise leads to enhanced analysis methods.

In this regard, the CTBTO is pleased to announce the first Innovation Challenge to CTBTO Youth Group (CYG) members. The Innovation Challenge tasks CYG members with investigating potential linkages between the CTBT and the Sustainable Development Goals (SDGs). CYG members are encouraged to submit a research proposal highlighting original ideas on how the Treaty and the work of the organization can help to achieve one or more of the SDGs.